Nexus of Writing and Cooking, Part 13 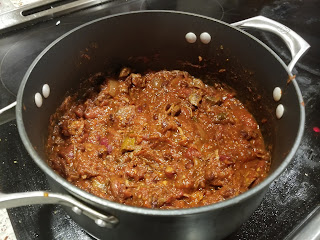 Aaron LeMay, one of the most interesting people you will ever meet and probably my coolest friend in the world, recently asked me, "Tell me about your writing process." To put this in context, Aaron and I are working together to complete his book, "The Gamer's Way," which is a self-help philosophy based on treating life as a game that you are playing, complete with pause and save-game functions you can use to help you analyze your "game of life" as you play to make better decisions.

This book and concept are very zen, which makes sense because Aaron has studied Buddhist teachings and many other Eastern philosophies. He also has worked on some of the biggest games you've ever heard of, including HALO and Saints Row. Did I mention that Aaron is one of the most interesting people you will ever meet? I had the honor to work with him at En Masse Entertainment, and not only is he a fascinating fellow, he is one of the best bosses I've ever worked for.

Now, you may be asking me, Will, what the hell does all this have to do with making Chili? I mean, that is a pot full of Chili up there in the corner, right?

Okay, let me get right down to it. When Aaron asked me about my process, I didn't have a great answer for him. You see, even though I am a strong proponent of outlines, when it comes to actually writing scenes and chapters and entire novels, I am more of a "seat of the pants" writer. To be totally honest, I don't fully understand my process.

A few days after I tried my hardest to convey to Aaron how scenes form in my head and how inspiration for some small detail that occurs to me to place in one scene often burgeons into some huge plot or character point a few chapters later, I was making chili for the family.

Now, I haven't made chili in months. It's just not a meal that most people want during the summer. So, when I started making the chili, I realized that my chili-making experience is very similar to my writing experience.

I've been making chili for a couple of decades now. The basics of it are mostly unchanged. I brown some meat, I add crushed tomatoes and diced tomatoes (for texture), tomato sauce, beans, maybe some onions, peppers, garlic, and/or mushrooms, and spices. Then I simmer for many hours, tasting periodically to determine what more it needs to get it right.

This is also the basics of my writing. I come up with an idea and write some level of outline (from a rough couple of paragraphs listing the main plot points to a multi-page, chapter-by-chapter, outline detailing all the rising and falling action over three acts. After that, I sit down to write.

With the basics of the plot (like the basics of the chili recipe) in my head, I begin adding action and character moments and dialog that move from plot point to plot point, adding things in here and there as I realize it needs some spicing up here or there and go back to add something or take out something (which you can never do in cooking, so bear that difference in mind). 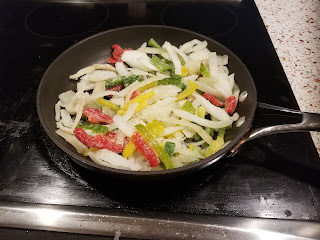 Now, over the years as I have gotten better at both cooking and writing, my recipes have changed and evolved. I now sear the onions, peppers and garlic in a pan and then add a little crushed tomato and oil and blend it all into a paste, which I add to the meat and beans (an idea I got by watching videos from Binging with Babish).

I still add diced tomatoes, onions (and sometimes mushrooms) to the pot (again for the added texture and flavor). But, where I once relied on chili powder, salt and garlic for most of my flavor, I now use much less to get the flavors right. This provides much more depth of flavor over my earlier, more amateur attempts.

But here's the thing. I still don't know ahead of time how it's all going to turn out. I have NEVER made a pot of chili that tasted exactly like any of my other pots of chili. I am not following a strict recipe of exactly this many ounces of onions to this many ounces of peppers to this many cans of tomato sauce, etc. That's why I taste as I go along. If it is too tame, I add more spice. If it is too spicy, I add more sauce (although that rarely happens).

The same thing goes for my writing. Even when I have a full outline, I never know when I start a scene if it will go exactly the way I envision it will go. Sometimes the characters want to say or do things differently and I follow them along to see how it all turns out. Sometimes a piece of description will catch my eye and send a scene in a completely different direction than I had envisioned.

Let me give you an example from the new Kolchak novel I am writing. Kolchak is investigating a haunted hotel and needs to speak to the hotel manager. As I'm writing the scene, the manager accosts Kolchak verbally and he responds in kind. This initial meeting, which I had never envisioned when I began writing the scene, colored the entire conversation. It became even more adversarial than I had ever intended, but it provided some great insight into who the manager was and what she thought of Kolchak, which I will be able to use later on.

But I also know I have to hit the points in the plot that I have written down in my plot, so when scenes go in different directions (and sometimes take the plot in a different direction after more scenes continue down that new path, I know I must nudge the characters and the story back toward the plot. This is like adding a dash of salt or garlic to the chili.

The interesting thing is that like the seasoning, I know the story needs something to get it where it needs to go, but I'm never certain which small bits of dialog or action or character moments will get it back on track, so I have to keep tasting and changing as I go until I get the result I desire. I can't push it too far too fast or it will leave a bitter taste in the readers' mouths, just like a pot of chili with too much salt in it.

The fun part of all this is when something unexpected happens and it turns out to be the exact thing I needed to really make the story come together. Here is a small example of what I mean. I was writing a short prequel to flesh out the back story of one of the characters in another short story I had written. Lobo is a young star ship pilot. When the ship runs into trouble, he ends up sprawled beneath the berth of a crew mate after everyone else has gone off to battle stations.

For an extra bit of flavor, I added the name of the crew mate instead of leaving it vague. Now that this crew mate had a name, though, she became a character in my mind with a backstory of her own. She had just been promoted to lieutenant but still berthed with the ensigns (a bit of Lower Decks playing in my head at the time).

Later, when I decided the emergency was going to cost the ship its entire bridge crew, this brand new character became the acting captain, and it turns out she knows Lobo's value far better than the now-dead officers because she had worked beside him (and even been saved by his piloting skills). This sets up the finale of the story (and the main plot point of this prequel) when this new character I had not even known existed until I named her, relies on Lobo to save the day.

I often find these small tidbits of flavor in my writing that I have added to a scene come back later and become far more important than I originally intended. I don't claim I can see the future and know these will become important — that I am adding them as some sort of almost as prescient foreshadowing. I think it all comes down to taking the time to add bits of spice that I know will add to the overall flavor of the story and then as I am tasting it later on, seeing how I can use that spicy bit to add some extra depth to the story.

So, yes, my writing process is a lot like my chili-making process. I have a vague recipe I am following that has evolved over time into a more complex process, but in the end, it all comes down to playing with the flavors as I go and tasting it all the way along to make sure the flavors all meld together and provide some depth to the experience.

Read more »
Posted by Will McDermott at 2:39 PM No comments: