The Nexus of Writing and Cooking 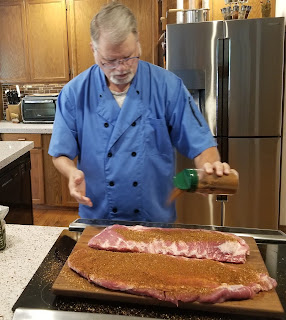 I've been a home cook (not a professional chef by any stretch of the imagination) for at least 20 years. I became the principal cook for our family of five back when I first took up the mantle of "freelance writer" back in 2001 after layoffs cost me my dream job at Wizards of the Coast and my wonderful wife landed her dream job at Fisher-Price. We packed up our house and moved across the country — for a second time (stories for another time) — and I became a stay-at-home dad.

In the beginning, my cooking was pretty rudimentary. We had a lot of cereal and Pop Tarts for breakfast, PB&J and baloney sandwiches for lunch (or tuna fish if I was feeling industrious). And, because I grew up in the Midwest, we had a lot of meat and tater dinners. Pork chops cooked to an inch of their life in a skillet and boxed mash potatoes were commonly seen on the table. I also relied more heavily than I would like to remember on Hamburger Helper.

But, here's the thing: Eventually, I got better and better at cooking. I figured out I could cook my own pasta and add spices or a can of soup to make my own versions of all those boxed meals. I experimented and I practiced every day. (It turns out kids and spouses are pretty adamant about wanting to eat after school and work on a daily basis.)

At the same time, my writing was getting better, because as a freelancer, I also was practicing every day — and like my cooking, the results of my experiments and practice were put on display because there was no time to "play for myself" as it were; all of my words needed to go from my desk to an editor's desk.

Luckily, at home, I had a pretty easy audience. Kids aren't looking for Beef Wellington. They're fine with burgers and brats. But even back then I started to find my own style of cooking and favorites began to appear more and more often. I distinctly remember the day that I realized that not only were home-made mashed potatoes far superior to the box version, they weren't that had to make. Boil, mash, mix in milk, butter, and salt, and then keep adding milk until it gets really creamy.

Then came Karen's potatoes. This was a recipe my mom sent me from a friend of a friend who loved decadent comfort foods. Karen added sour cream and cream cheese to her potatoes on top of a LOT of butter. Oh. My. God! It was so good. From then on, I would look for new recipes whenever I got tired of making the same thing over and over. I wanted to really experiment and up my game in the kitchen.

Then we moved back across the country again when I landed a job in the video game industry in Seattle. I had less time to experiment and we needed quick foods after a long day at work, so tried and true became everyday, which meant lots of burgers and brats and pork chops and pasta again.

But something had changed in the five years we spent in Buffalo: the Internet had really exploded and YouTube had arrived. If I wanted to try something new all I had to do was enter a search query and up came dozens of recipes. I would look for simple ones that had ingredients we had on hand and whip something up. My success rate was rising and I was getting a bit of reputation among the family at home as well as friends and co-workers at potlucks.

My wife and I missed German Potato salad, which we used to get from a can in the Midwest, so I found a recipe. My wife fell in love with Butter Chicken at an Indian restaurant near her office, so I found a recipe so I could make it for her. We went to see Avengers and afterward wanted to try Schwarma. After finding a fantastic restaurant in Downtown Seattle, I thought, "I can make that," and found a recipe I still use (we had Schwarma just the other night in fact).

Around this time, I also began experimenting with the recipes to make them more my own. I found a wonderful Moroccan spice blend that I substituted into my schwarma recipe. I love barbecue, so I found a rub recipe and made some modifications instead of relying a store-bought blend. (The image above, showing me applying my dry rub to a couple racks of ribs was taken as part of an application to become a traveling BBQ reviewer.) Just like with my writing, as I became more comfortable with how the different elements of the recipe worked together, I could make intelligent substitutions.

Then came YouTube cooking shows. I had watched a lot of Chopped, Diners, Drive-ins and Dives, and Alton Brown's shows on cable for a while and definitely learned a lot more from those than I ever had from following recipes. For one thing, I learned I hadn't been holding my chef knife correctly. I also learned how to season and cook steaks to perfection (as well as pork chops and fish — mo more dried-out meat in my house).

But my education as a cook has increased ten-fold in the last few years since I became addicted to Binging With Babish. If you haven't seen this YouTube series, go check it out now and then come back in a few hours (or days) to finish reading this blog. Andrew Rea's show takes foods shown on television and movies (like Schwarma, but also like Sponge Bob's onion sundae) and shows how to make them — and how to make them better.

What I love about the Babish YouTube Series (he also produces Basics with Babish) is that he is self-taught (like me, only a LOT better) and talks to his audience as equals. His directions are clear and he explains why he is doing things and not just how to do them. I have learned more about cooking from watching Babish than from any other source.

So, today, when I am deciding what to make for supper, instead of thawing some ground meat and grabbing a box of Hamburger Helper, I go look in the freezer for inspiration. I check out the meats we have and the veggies and anything in there I can turn into a side dish and, in my mind, I create a meal plan for the night where every dish if building on the others to create something special.

Again, this is how I write as well. I get my characters together and their various plot lines and their histories that might come into play and I weave them together in — what I hope — is a pleasing story that not only hangs together but transports the reader to another world. As with my cooking, I am self-taught as a writer. But, like my cooking, I take inspiration from others — from professional chefs and cooking gurus who know more than I do and have things they can teach me.

And that's why I am writing this blog today. It is an introduction to a new series of blogs I plan to write about how the craft of cooking and the craft of writing are not only similar in that in the right hands, they are an art form, but that they both require a lot of practice and patience. They both require practitioners to learn the basics so they can then experiment intelligently with the elements to create something that is far better than the sum of its parts.

I don't claim to know it all about either subject, but as a talented, self-taught, semi-pro at both, I think I have some insights into what is needed to succeed and, maybe, how to avoid dried-out, flavorless dishes.

Until next time, keep learning and never stop experimenting.