Tools of the Trade

Nexus of Writing and Cooking (Part 2) 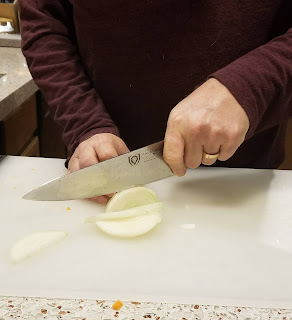 When I started cooking, I knew nothing about knives or pots and pans (or even spices and seasoning). I had a basic set of nonstick pans, a few glass baking pans (just like my mom used), some plastic spatulas, and measuring cup. I honestly didn't really know how to use any of them correctly.

This was not how I started as a writer. Before my first published story, I had taken years of English classes in high school and college, edited and written professionally as a newsletter editor and then later as both a magazine and book editor, and read tons and tons of books. I was not yet really reading critically (by which I mean, dissecting a story as I read it to see the choices the author made on things like plot lines, characterization, rising and falling action, crises points, etc.), but that would come in time.

My point is that when I started cooking, I didn't really have the tools of the trade or know how to use them. Because of this, my cooking was amateurish. It was fine for my family and I could follow a recipe with the best of them, but it was definitely lacking something (butter, mostly, if you ask any professional chef) and my mistakes far outweighed my successes when I experimented.

Here now are some of the writing and cooking tools I have learned to use over the years and why it is important to learn them early.

Strong Grammar. It all starts here. You might think it's a bit pedantic (and, yes, some people do get pedantic about grammar), but clear writing requires clear grammar. Yes, you can abandon grammar in your writing, but you must do so purposefully and with good reason, not because you don't know better. For example, you can have a character who doesn't use good grammar when speaking, which makes a strong statement about that character.

Word Choice. This is the big one for me (almost bigger than "show, don't tell"). First and foremost, avoid using "is" and "are" as much as possible. The English language can be agonizingly frustrating in its complexity, but we have stolen some of the best words other languages ever created. Use them! Nouns and verbs are the lifeblood of writing. Finding the right ones for every situation not only makes your writing stronger, it makes it more concise. Strong nouns and verbs don't need modifiers. I'm not saying don't ever use adjectives and adverbs, but sparing use will make them stand out and be more impactful.

Sentence Length. This is a rule I learned late in life. I was definitely one of those writers in school who loved long, complex sentences that went on for entire paragraphs. When I discovered the power of short sentences, it transformed my writing. I still use long sentences, but I try to use them purposefully. Sentence length is a sign to your reader to either speed up or slow down. Short sentences will drive your plot forward and are great for action sequences. Long sentences slow readers down so are perfect for when you want the reader to pay close attention while you explain something they need to understand.

Show, Don't Tell. Anyone who has ever wanted to be a writer has heard this aphorism.On its face, it means you should use concrete details when describing scenes and action. Don't just say, "she hit him." Say, "She slapped his cheek the imprint of her fingers were visible in the red imprint left behind." But more than that, show don't tell should influence all of your writing. Show the emotion on a character's face instead of telling the reader he looked sad. Have a character, in their own words, tell the reader and the other character in the scene what she is thinking instead of just narrating that for us. Paint a picture. Don't write an essay.

Chef Knife.This is the "word choice" of cooking tools. It is the most important thing to get right. For years, I had no idea how to use my chef knife. I held it wrong and used it for everything. It is the perfect tool for dicing and chopping vegetables, but isn't really all that good for meat. When you hold it correctly (see the picture above) and hold your veg with your fingers curled so your fingernails become a guide, you can chop faster and more precisely. This makes your work so much easier and your finished product more professional.

Kitchen Scale. More important for baking than cooking (where precision is critical because it's basically chemistry), a good kitchen scale can also help you with portion control and when following recipe directions. Until you have a frame of reference for how large  4-ounce or 8-ounce piece of meat is or how much flour you need to add 250 grams to your pie crust dough, you will want a kitchen scale to help.

Meat Thermometer. I refused to use thermometers for a long time, but now that I have a really good one that gives me a readout almost immediately, I never serve meat without checking it first. This is really important for smoked meats where you need to heat to a very specific internal temp and any time you want to leave some pink inside a thick steak without serving raw meat to your friends and family.

Stainless Steel Pans. I will admit that I have always used nonstick-coated pots and pans for all my cooking. I was deathly afraid of scorching my food and ruining both the meal and the pan. But, I have learned that stainless steel pans are important because those bits of baked on food are pure flavor when it comes time to make a sauce. Sauces scared me just as much as stainless steel pans, so I guess that's why it took me so long to come around. But searing a piece of meat and leaving all that "fond" behind to be scraped into your sauce is what it's all about. (Note: I plan to write a future blog all about my fear of sauces, so stay tuned for that.)

Why Basics Are Important

There is an old saying that goes something like this: You have to learn the rules before you can learn how to break them. The famous example of this is Picasso, who had learned the rules of perspective, but chose to use flattened perspective for purpose.

This is basically true. I like to use "and" repetitively in lists instead of simple commas and a single, trailing "and" at the end. I do this to add emphasis and give the writing a certain cadence. I like to think it's artistic, and I probably do it too often (a sentiment my editors definitely embrace). But, here is the thing. I am doing this purposefully. I am choosing to break the rules and I have reasons in my mind for doing so. And I am always aware that if I choose to break the rules, I may sacrifice clarity, and if that lack of clarity leaves readers in the dark, I have failed as a writer.

But, more importantly, rules also provide a much more concrete benefits to both the writer and the cook: Speed and precision. Using strong verbs and nouns doesn't just make my writing stronger, it makes it shorter. Sure, I often spend time staring at the ceiling searching my brain for the right word (or going on rhymezone to find synonyms). But I can often use five words instead of 25 to get a point across. Knowing how to correctly hold my chef knife sped up my dicing (and made it more precise so the end result vastly improved).

Taking the time to know the basics pays dividends over the entire course of the rest of your career. Look, I know I am not a professional chef. At best, I'm a semi-talented amateur. I wish I had learned how to use a chef knife correctly twenty years ago or taken more than a couple cooking classes. On the other hand, I am glad I learned to choose my words more carefully — and vary my sentence length, and show don't tell, and all the other little rules of writing I learned — way back when. Without putting in all that work to learn the basics, I wouldn't be a professional writer today.

I have a story in a wonderful anthology called Turning the Tied that will be on sale on March 13. The proceeds from this amazing collection of stories by fellow shared world writers features famous characters from some of your favorite stories. Plus, all proceeds go to the World Literacy Foundation.

Check out this cool video trailer created by Ben Rome, one of the authors.

Pre-order the ebook on Amazon.

Posted by Will McDermott at 9:42 AM