The Art of the Appetizer

The Nexus of Writing and Cooking, Part 10 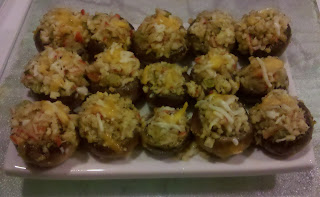 This week, I want to write about small plates and short stories. Both serve similar audience niches in their respective settings. Small plates (or appetizers in most American restaurants) give you a taste of a particular dish or meal without filling you up. They also can provide a wonderful complement to the subsequent main dish. Likewise, good short stories give readers everything a novel provides — plots, perhaps a subplot or two, character growth, and a satisfying or thought-provoking conclusion.

Another similarity small plates and short stories share is that my skill in both suffers from an aggravatingly similar issue: I try to put too much into them, which makes them just a bit messier than I'd like.

A good appetizer is packed with flavor from some non-singular number of different elements but is bite-sized so all that flavor explodes in your mouth at once. Bacon-wrapped prawns and crab-stuffed mushrooms are good examples. For fancier gatherings, spring and summer rolls filled with all sorts of meats and herbs and mini tostadas topped with cheese and fruit or seasoned meats are wonderful and can literally explode in your mouth when done right.

A good short story can weave an intricate tale with fully-developed characters that transports you to another world in just a few thousand words and makes you feel deep emotions when those characters ultimately succeed or fail. One of my favorite short stories of all time was

Where I Go Wrong

I believe the problem I have with both small plates and short stories stems from how I learned to cook and to write. I started cooking on a regular basis when I became a stay-at-home dad and freelance writer. At the time, I was cooking for a family of five with three growing, school-age children. I cooked large, easy (often ready-to-make) meals at first, which eventually transformed into large, slightly more complicated (more often from scratch) meals as I became more skilled in my cooking.

The common element in all of the meals I have made in the past 20 years was that they were large. I am well-known within our family for loading the table down with too much food, and not just on Thanksgiving day. Likewise, when I started writing fiction, early in my writing career, I was tasked with writing novels. Sure, I sought out and wrote short stories at the same time, but it was the novels that really sparked my interest.

A typical novel runs anywhere from 70,000 to 100,000 words. I have written shorter novels (sometimes called novellas, but not always), and big-name authors have written numerous 300,000-word novels. The point here is that novels are large. The typical short story you find in magazines or anthologies, on the other hand, run between 3,000 and 7,000 words. I've seen great 1,500 word short stories and there is a category of shorts called "Flash Fiction" that run no more than about 500 words.

My short stories probably average somewhere around 9,000 words. The reason, I have often thought, is that I write short stories like I write novels. In a novel, you have time to explore the setting and the minor characters, and space to allow the plot to meander a bit as it works its way through the 3-act structure toward the culmination of the final conflict.

Short stories, like small plates, require the author/chef to be frugal with their elements/ingredients and maximize the impact from every piece added to the mix. A good hors d'oeuvre has a small piece of meat and/or cheese topped with a sprinkling of fresh herbs or a dollop of seasoned stuffing spooned into a perfectly cooked mushroom cap topped with a few shred of melted cheese.

I tend to be more of a dumper when I cook. I keep adding crab flakes or crumbled bacon to my stuffing mixture until I have too much to comfortably stuff into the available mushrooms. I cut my slices of meat or fish too large because I worry there won't be enough there to bring out the flavors. I over-stuff and I overfeed, again most likely because I am used to making large meals instead of small plate. I have never mastered the art of getting big flavor from finely-balanced combinations of smaller portions.

Build Smaller or Cut Back

I long ago accepted my shortcomings with short stories and small plates and have a developed a few tricks to help me deal with my tendency to  cook and write big. For my small plates, I have learned to make my dollops smaller. I use a melon-baller or a small spoon to fill my mushrooms. I try to worry less about what to do with extra filling or meat and either put it away for another time or find some other small plate where I can incorporate the extras.

When it comes to short stories, I have a different tactic. Instead of forcing myself to write small, I allow my expansive nature to control the first draft. But, when I go back through that initial first draft, I try to trim a good ten percent of my words. I seek out overly complex passages and tighten the prose. I look for spots where the plot has gotten a little out of hand and see if I can get those plot points across in less space (or drop them entirely if they are not adding to the flavor of the whole). If I have two or three sentences of description, I cut back to just the best bits of all of them.

When I am writing a first draft, I try to keep my scenes short so the story moves along more quickly. Where I like to write 1,000- or 1,500-word scenes in a novel, I try for 500 words max in a short story. This helps constrain my wordiness and give me enough scenes to fit in all the plot.

The one piece I can still do better on is to not try to pack quite so much plot into my short stories. In my two most recent short stories (one in the Turning the Tied anthology and another that will appear in a Renegade Legion digital anthology from Budgie Smuggler games), I definitely created plots that were too intricate and expansive for the story-size requested. Even after trimming and tightening, both of these stories ran a bit long.

Don't get me wrong. I am proud of both of these stories. I think they are well-paced well and believe they read as easily and quickly as shorter efforts from other authors. I just have never mastered the skill of telling a deep, compelling story in a small space and maybe that's okay. I happen to like a little more meat in my meals and my stories. 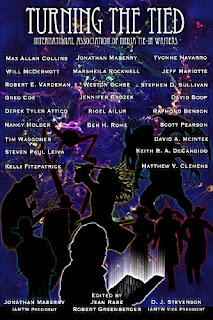 I will be meeting virtually with several other authors from the Turning the Tied anthology for an online book event sponsored by University Books in Seattle, Washington. The entry fee is the cost of the book, which all attendees will receive.

This is a three-night event, from May 25 to May 27. Each panel begins at 6 p.m. PDT, with a different set of authors presenting the Zoom panels each night. For more information, check out the University Books Event Page.

I will be on the Wednesday, May 26 panel along with the following wonderful authors:

Posted by Will McDermott at 2:05 PM