It's All in the Timing

The Nexus of Writing and Cooking, Part 9 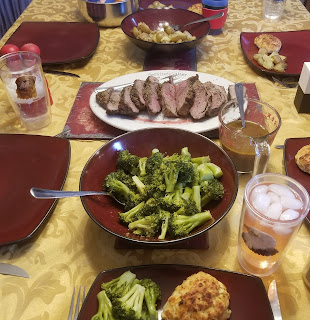 I've been thinking a lot about pacing this past week. In any narrative piece of entertainment, pacing is the speed at which things happen in relation to other things. Sometimes this means how fast the action driving the story forward occurs in comparison to other elements of the story, like plot and character development. It can also mean how quickly the main plot progresses in comparison to elements of the subplots.

Getting the pacing right in a story is a difficult balance between keeping readers interested in the story by moving the plot along at a good clip while spending time to build thematic depth to provide meaning to the plot and developing the characters into something more than 2-dimensional plot movers.

In the somewhat distant past, authors had more time to develop this depth because entertainment moved at a slower pace. Don't believe me? Look at a movie from the 1940s and compare it to a move from the 2010s. Books are the same. Whenever I reread a favorite book from my childhood, I am amazed at how slow the story moves. I mean, Tolkien literally spends four pages of the first chapter of The Hobbit having Thorin orate an exhaustive history of his forefathers accumulation of wealth in the mines of Moria and their eventual defeat at the hands of Smaug.

A modern author likely would sprinkle the pieces of that story throughout the first third of the book instead of dumping it all at once in chapter one. The pacing of stories changed forever with the advent of television, which told shorter stories that moved through the three-act structure in 22 minutes for comedies and 42 minutes for hour-long dramas.

Today, many mainstream movies follow the same formula for pacing: Within ten minutes you must introduce the main characters and their salient backgrounds and issues because the "inciting incident" ( the first crisis that drives the plot forward) must occur by minute 10 (page 10 of the script). Because so many movies move at this quick pace, that films that don't follow this formula (often indie movies) are often labeled as "slow."

I'm not immune to this feeling either. In the past week, I watched two different pieces of streaming entertainment that brought all of this to the forefront for me. First was the season finale of The Falcon and the Winter Soldier. I had not realized until after episode five that this season was going to end with episode six.

Up to that point, I hadn't understood the pacing of the plot. The subplots introduced in episode one had lain fallow for a couple of episodes and I had wondered at the time why we weren't seeing more of the two main characters' home lives (which were introduced in depth in the first episode). But with only six episodes, it began to make sense to me.

The subplots reared their heads in each of the two-episode "act" of the season plot structure, and then came to the fore again in the final third of the story to bring everything together. The pacing, which seemed odd when I was expecting eight to ten episodes made a lot more sense in a six-episode story arc.

The other streamed show I watched this past week was an indie movie called The Vast of Night on Prime. This 90-minute movie tells a Twilight-Zone-esque story set in the American heartland in the 1950s. I kid you not, this movie spent at least 20 minutes (more than one-quarter) of the movie introducing the relationship between the two main characters as they moved through the parking lot of the local high school talking to families arriving for a big basketball game. It felt to me (as I said) s-l-o-w!

Now, I love indie movies and I appreciate a well-made film that takes its time to tell the story. Also this past week, I watched Nomadland, the Academy-award winning movie about transient elderly people living in vans and traveling around the West from part-time job to part-time job. It was wonderful. Even though the pacing wasn't Fast and Furious, it maintained my interest because it invested me in the characters and their lives immediately.

But Vast of Night didn't work for me. I think, in part, because each of the interactions the two main characters had with different people in the parking lot didn't differ enough to stand out. They just became this long, walking tour of sameness (which maybe was the point; this was white, middle-class America in the 1950s after all, which was about to be turned upside down by some strange, Twilight Zone happenings. But it lost me before I got to the inciting incident. The movie didn't give me enough reason to wade through the parade of blandness.

What does all this have to do with cooking?

Okay. Thanks for bearing with me through this long intro. I know, ironic, isn't it? The final piece of the pacing puzzle occurred to me while I was cooking a big meal for a Sunday family dinner honoring my daughter-in-law's birthday. I had decided to make a butterflied leg of lamb using a wonderful recipe I found a couple years ago.

This recipe is pretty fiddly. After butterflying the leg, you spread a pasty herb rub all over the meat and then let it sit for an hour. You then broil both sides for 8 minutes (turning at least once on each side for even cooking) and then let it rest again for another 10 minutes before popping it into the oven to bake for about 50 minutes (until it reaches 140 degrees internal temp).

Now, this particular night, I decided to make a couple of easy side dishes that I knew I could put together in that last 50 minutes of cooking time to make sure that everything was ready at the same time to be put onto the table. We had crispy-baked potatoes wedges and steamed broccoli. I've made both of these dishes many times so know how long each takes to prepare, preheat, and cook.

I also wanted to bake cheesy-garlic biscuits (you know, Red Robin biscuits), which I mixed so I could bake in the bottom oven while the lamb was broiling in the top oven.  Then, after the biscuits were done and the lamb rested, I could put the lamb down in the lower oven with the meat probe, and then start on the sides.

This constant moving from main dish to side dish, from one oven to another (plus the toaster oven for the potatoes and the stove top for the steamed veggies) is what the pacing of cooking is all about. (Plus, don't forget the prep time to get to the cooking stage at the right time.) It's a balancing act that requires precise timing. How long does each dish need to cook? How much prep time is needed? Does the meat need to rest afterward? Can a dish be kept warm without losing its flavor and visual appeal?

These are all questions a cook must answer before starting a meal if they want everything to be ready in time for everyone to sit down to a multi-course meal and absolutely analogous to the pacing in a story. (See part 3 of this series for more on the connections between subplots and side dishes.)

When I write a novel, I must balance the necessary points of the main plot alongside the required development of the main character so that the events driving the story along reach the critical point at the same moment the character has the major breakthrough in their development that allows them to be in the right place (both physically and mentally) to handle that final crisis.

In addition, if I am weaving subplots throughout the novel that will interact with the main plot at that same critical juncture (perhaps bringing a secondary character to the point of crisis at the same moment as the main character but through a completely different story line), the pacing of that subplot must be carefully manipulated so that everything comes to a boil at the same moment during the climax. This was the issue I had with Falcon and the Winter Soldier. I didn't understand the pacing because I didn't expect the climax to occur after only six episodes.

So, just like when I am juggling the preparation of different side dishes so they are ready at the same time as the main dish, when I am writing, I must juggle all the parts of the subplots and all the character and theme development alongside moving the elements of the main plot along so everything comes to fruition at the same time during the last act. Plus, I must do all of this while not losing the reader's interest. 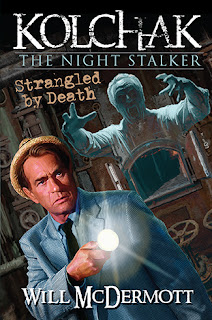 My latest book, Strangled by Death, a Kolchak the Night Stalker novel, is officially out today, April 26. Unfortunately, we had so many pre-orders that the book is already out of stock. Hopefully, more will be available soon. Please check at Moonstone Books in the coming weeks for any news about extra stock.

If you did pre-order a copy, please let me know what you thought of it once you read it. And if you liked it, consider giving me a positive review online. Writers build audiences through reviews, and it is the best present you can give to your favorite authors.

I have one other novel in the can already, but unfortunately it is stuck in licensing approval limbo at the moment, so I cannot talk about it yet. It is set in a highly recognizable SF universe, and I am very excited about it.  So watch this space for more info when I can finally talk about it.