The Nexus of Writing and Cooking, Part 12 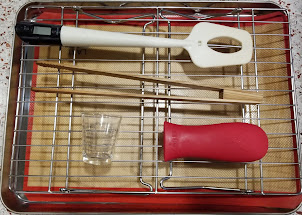 Way back in Part 2 ("The Tools of the Trade") I discussed some of the essential items you need in your cooking and writing arsenal if you want to be successful. Today, I want to look at some of the gimmicks and gadgets you can use to make your life easier in the kitchen and add some pizzazz to your writing.

Let's get right to it with a list of cool things I have in my kitchen that I simply couldn't do without anymore.

Shot Glass Measuring Cup. You need a lot of measuring cups and spoons in your kitchen so you can add precise amounts of spices, flour, sugar, milk, wine, or broth at the exact moment called for in the recipe.A shot glass measuring cup helps you add small amounts of liquid (an ounce or teaspoon or tablespoon) precisely. I use mine for honey and brown sugar when I make my own teriyaki sauce.

High Wall Baking Sheet. We all have baking sheets that we use for baking cookies, heating up fries in the oven and placing under pie tins when we fear they may bubble over. But a high-walled baking sheet is the best way to cook large pieces of meat like a turkey or a ham or a couple racks of ribs. The high walls keep the juices in but are low enough to allow the heat to circulate around the meat for more even cooking.

Baking Rack. Add this to your high-wall baking sheet to raise your meat out of the juices and allow the heat circulate beneath as well as completely around as you bake.

Wooden Tongs. A good set of wooden tongs are a must if you are cooking in a high-temp, non-stick skillet that might melt your silicone-tipped tongs. I use mine for bacon or sausages mostly, but they come in handy any time you need to turn or flip meat in a skillet (steaks, chicken breasts, etc.).

Spatula Thermometer. I have a couple instant-read thermometers, which are absolutely necessary for getting meat heated through to the correct internal temperature. The spatula version of this essential tool is great for sauces, bread-making (to check the temp of the water you're adding to the yeast) and whenever you're deep-frying and need to keep a constant temperature in your oil.

Unlike cooking gadgets, you can't just go out and buy these items (other than the thesaurus; although you still need skill to use one correctly). Instead, you must develop these techniques over time through practice and research. Here are a few of my favorites.

Simile and Metaphor. As a writer, the most important thing you do is to describe the world your characters travel through. For fantasy and science fiction writers, especially, those worlds can be so strange and alien that it can be tough to describe them in ways that readers can understand. That's where a good metaphor or simile comes in handy. These help you relate what the characters see to something the readers will understand. Just be careful not to break the illusion of the story. Saying a strange large rock formation looks like a football balancing on a golf tee won't make sense if your character lives in a world without those two sports.

Thesaurus. I have mentioned this before, but it bears repeating. Choosing the strongest nouns and verbs you can find to describe actions and items in your world is far superior to stringing together a bunch of adjectives or adverbs. It makes your writing stronger, tighter, and less cluttered, which are all good things. A good thesaurus will help you find the best words to use whenever you get stuck in your writing. Most word processors come with one, but I find them to be too limited. I use Rhymezone, a website created for poets that you can use to find synonyms as well as rhymes. You can even go down the rabbit hole of  looking at related words "grouped by relation" which can be a lot of fun.

Foreshadowing. There is an old saying in murder mysteries: "Don't put a gun on the mantle in act one unless you plan to use it in act three." This is foreshadowing, and it is a tricky gimmick to use. You often want to give your readers a peak at what's to come later on so they don't feel completely blindsided by some major plot development. For example, if readers don't know a character is an astrophysicist when they first meet them, when that character starts spouting some quantum mechanics integral to the plot later on, it will feel odd and forced (and just a little too convenient).

You have to be careful with foreshadowing, though. If you are too obvious when you mention it (or mention it too often), readers may see your plot twists coming a mile away. If you are too oblique (or don't mention it often enough), you risk losing some readers when the revelation becomes important. Make sure you integrate the foreshadowing into the narrative so it feels natural and not forced and then reinforce it once or twice again during the story to make sure all readers catch the reference.

Plot Structure. I have discussed this before, so I won't go into a lot of detail here, but having a plot structure in mind as you write can help keep you on the rails as you move through your story. I often use the three-act structure where action intensifies through act one as things fall apart, the characters try to find ways to combat the obstacles in act two, and then everything falls apart again at the end of the act, forcing the characters to change gears in act three to find a new solution to the main problem. This structure helps readers as well, because they understand where they are in the story, but the rising and falling action of this structure also maintains reader interest as the action builds toward multiple climaxes as reader move through the story.

Analogy and Allegory. Similar to simile and metaphor, analogies and allegories help writers convey information to the reader through comparison. These two gimmicks work at higher and larger levels, however — more at the plot structure level than the word, sentence, or paragraph level. An analogy is simply comparing one thing to another that makes people assume additional similarities in other aspects. So, you might write a story where two character who are going to fall in love must fight each other in a fencing match (or tennis or whatever). The sporting competition becomes analogous to the development of their relationship (turning it into a contest).

Allegories plot structures where the story being told is directly comparable to other stories that have deeper meanings. These are often used by science fiction writers (especially) to delve into topics that are tough to discuss straight on (religion, politics, race relations, etc.) without bringing all the baggage those sensitive topics carried by both writers and readers. The original series Star Trek episode "Let that Be Your Last Battlefield" was an allegory about race relations set on a planet where people were half-black and half-white, with right-half-white people hating left-half-white people and vice-versa. Silly? Today, maybe. But still insightful and depressing as we see what has happened in America since this episode first aired more than 50 years ago. 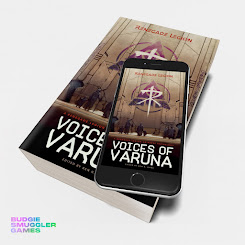 The Voices of Varuna anthology is available as an Amazon Kindle ebook now. It will be available as print-on-demand (POD) paperback soon (watch this space. Created to support the re-release of the Renegade Legion Universe by Budgie Smuggler games, it is a wonderful collection of stories set in an amazing far future Milky Way galaxy.

My story in this anthology, "Unsanctioned," is one part Oceans Eleven and one part Hogan's Heroes, all set in the 75th Century.

For more information my and other stories (and to meet some of the authors), check out the author panels on the Budgie Smuggler Youtube channel. 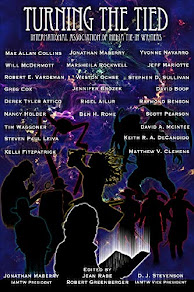 The FREE Turning the Tied Author Event, hosted by University Book Store, takes place in just two weeks. Don't miss your chance to interact with more than twenty authors of some of your favorite characters, games, and series. And, best of all, the event is FREE! Register today!

For three evenings, from June 29 to July 1, University Book Store will host authors who contributed to this charity anthology in a series of Zoom panels. We will discuss why we chose to tell the stories we wrote, how we come up with our ideas, what it's like to write in other people's worlds, and answer questions from the audience.

The panels start at 8 p.m. EDT (5 p.m. PDT). And you can purchase a copy of the anthology, which will help the World Literacy Foundation, as all royalties go to this wonderful charity.