Turning the Tied with Words

I thought I would take a break from my "Nexus of Writing and Cooking" series to talk about my contribution to a wonderful charity anthology titled Turning the Tied (available from Amazon in both Kindle and paperback). Published by the International Association of Media Tie-in Writers (IAMTW), this wonderful anthology is raising funds for the World Literacy Foundation, a global non-profit organization working to ensure every child has access to books and the right to acquire literacy skills from an early age.

In this anthology, all of these authors, noted for writing in some of the most popular shared worlds from recent movies, TV shows, and games, have taken a stab at writing stories for some of their favorite public domain characters of all time. These include Sherlock Holmes, John Carter of Mars, Hopalong Cassidy, Mulan, the Three Musketeers, Cyrano de Bergerac, Baron Munchausen Frankenstein's creature, and in my case, the Norse gods Baludr and Loki.

Note that all 24 authors and both editors (all members of the IAMTW) donated their stories and time to make this anthology happen and maximize the proceeds to the World Literacy Foundation. For more information about this wonderful charity anthology, check out the Turning the Tied page on the IAMTW website dedicated to the anthology. If you want to read blogs about the anthology by the other authors, check out this page!

But for today, I want to talk about my contribution — The Trials of Baldur.

Genesis of a Heroic Myth

When I agreed to submit a story for Turning the Tied (which took zero arm-twisting, believe me), I knew immediately that I wanted to pen a mythological story written in the same style as the stories that have been handed down from ancient times (verbally for centuries until they were finally recorded by ancient scholars. One reason for this goes all the way back to college when I took Science Fiction Literature with Professor Thompson.
This class was probably one of the first of its kind (definitely the first at Purdue University in the mid-1980s). We read and analyzed such seminal works as Isaac Asimov's Foundation, Ray Bradbury's Fahrenheit 451, John Gardner's Grendl, Kurt Vonnegut's Galápagos, and Ursula K. LeGuin's Left Hand of Darkness. For one project that semester in lieu of writing an essay about one of the novels, we could write a new chapter for Left Hand of Darkness, creating a new Gethenian myth for Estrevan to tell Ai during their trek across the frozen wastes of Gethen.
My new story detailed the Gethenian apocalypse, which was oddly missing from LeGuin's novel. It came in at somewhere less than 800 words (well below the minimum wordcount), and yet not only did I get an A on the assignment, I received a long, glowing note from my professor that began with "Wow!" and ended with "May I have a copy?" This was some of the first real praise I ever received for a piece of fiction I had written. It truly made me believe that I could become an author.
Since that class and that assignment, I've often thought about writing other myths, legends, and/or fairy tales, but never had the perfect opportunity to do so — until now. the only other question was which mythology to use as setting. This choice also was obvious. I've loved the Norse mythos since reading Reading Kevin Crossley-Holland's retelling of them based on the 13th Century Prose Edda by Snorri Sturluson. I believe I read Holland's The Norse Myths as part of another English class (Possibly high school based on the date of the book), and I still have the original 1980 imprint in my library.

So, with "writing a new Norse myth" set in my head, I began reading through the stories in Holland's book. I had always been drawn to Baldur, so I started there. What struck me was that there were only two stories about Baldur (and one or two other mentions in passing).
Both of these stories deal with Baldur's death. In the first, he has foreboding nightmares that Odin finds upon a trip to the Underworld are premonitions of the god's death. The second details the efforst of Freya to get all things in the nine realms to swear they will not kill Baldur (only to skip Mistletoe), and Loki's efforts to get Baldur's blind brother Hodr to shoot the supposedly death-immune god with a Mistletoe tipped arrow.
The other thing that struck me about the Baldur stories were the odd, almost cameo appearances of several characters that are mostly unexplained. During the preparations for Baldur's funeral, much is made about hos deeply all things love the god. In fact, Hela decrees that if all things swear their love to Baldur, she will allow him to return to Asgard alive. Only one creature in the nine realms refuses — a giantess named Thokk, whom most believe is Loki in disguise.
Then, at the funeral, another giantess named Hyrrokin must be summoned to shift Baldur pyre boat off the shore. She arrives riding a wold using snakes as reins. Near the end of the funeral, a dawrf (dark elf) name Lit wails and wails as the boat burns in the water until Thor kicks the dwarf into the boat, where he dies.
So, an idea began to form. Baldur is seen as the fairest and best of the gods, but the only stories about him that have survived detail his death. This is not completely out of bounds as his death brings about the beginnings of Ragnarok, so it is a vitally important event. But what if there were other stories that told the tales of Baldur while alive, that depicted why he was so beloved by all. I realized that Baldur needed a Hero's Journey.
My story shows Baldur in his prime working to bring Mistletoe to the Druids of Midgard who are pining for any sign of spring in the middle of a harsh winter. Along the way, he defeats a serpent, defeats a giant, and rips a mighty oak tree from the ground.But I also wanted to tie in the other characters who appear in the later stories. So, along the way he meets Thokk, Hyrrokin, and Lit and their interactions help explain their reactions in the Death of Baldur tale.
And, because this is a story about Baldur and Mistletoe, you know the mischievous Loki plays a vital role in the tale. Loki hates Baldur because the shining god is the antithesis of the Dark Lord. Baldur is everything Loki is not and he cannot abide Baldur's continuing existence. To see how it all works out, you'll have to purchase a copy of Turning the Tied (which is also available from Barnes and Noble).

Hear from the Authors of Turning the Tied 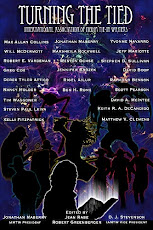 If you're reading this blog before July 1, 2021, you still have time to tune into a FREE 3-day Zoom panel (beginning at 5 p.m. PDT each night from June 29-July 1) featuring nearly every author in the anthology. The event is sponsored by University Book Store in Seattle and you can register for all three days at the EventBrite site.