Of Side Dishes and Subplots

The Nexus of Writing and Cooking, Part 3 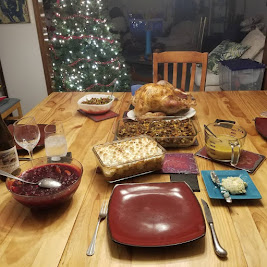 I spend a decent amount of time thinking about what side dishes I will prepare to accompany the main course of a meal. As mentioned earlier in this series, I grew up in the Midwest, so was (and still am) a big fan of meat and potatoes dinners, and my early dinners often were variations on this theme.

Some things just go together, right? Steak and baked potatoes. Meatloaf and mashed potatoes. Pot roast with carrot and potato wedges cooked in the pot.

This cadence went further, with fish and rice, fried chicken and corn on the cob, spaghetti and meatballs (and garlic bread), and, of course, one of our big favorites (to say anyway, because it's fun) — Pork Chops and Applesauce. (Try saying that like you're bugs bunny pretending to be a gangster. Trust me, it's hilarious.)

Over the years, I have tried to break out of the tried-and-true side dish combos to find meals that are fun, filling, and flavorful. I learned how to make risotto as well as rice. I found and created recipes for scalloped potatoes instead of making them from a box. I stocked my fridge with veggies beyond iceberg lettuce and carrots to make salads with multi-layered flavors. And I tried out different ways to cook vegetables, like roasting, steaming, and (our favorite) sautéing with shallots.

So, when the question, "What's for dinner?" comes up, I invariably find myself standing in front of the freezer looking at my choices. I can't settle on a main dish until I find the right set of side dishes to serve with it, side dishes that complement the main dish, work well alongside it and add to its flavor instead of fighting those flavors.

One day, recently, while standing in front of the freezer, I realized that I do the same thing when I  craft subplots to add to a story. It occurred to me that subplots and side dishes are nearly identical in form and function in their separate arenas.

So, let me go through a few key similarities between subplots and side dishes, as I see them, and a couple points to consider when adding them to your main plots and main dishes.

One of the main things that both subplots and side dishes do is to help fill your plate. Writers can't always fill an entire 300-page novel with a single plot (and for the reasons listed below, most don't want to). Subplots help fill the pages of the book. They are extra little stories being told alongside the main story, and as such, need a beginning, middle, and end, as well as some growth for the characters involved in that plot.

Side dishes are exactly the same. Plating is important to the proper presentation of a meal, and unless you are in what we used to call "hoity-toity" restaurants that put a single bean in the middle of a plate with a splash of sauce, you need more than one course to fill the plate. That's where the side dishes come in.

A subplot's real main job, though, is to support the main plot and, often, to act as a mirror to shine a light on the themes and action happening in the main plot. For example, in my short story, Banner-Jarl, in the Uprising anthology, I tell two stories simultaneously, one in the present and one in the past. In the main, present-day story, the main character, Grendl (a bounty hunter) is chasing a bounty through the Underhive. In the sublot, set in the past, It is Grendl who is being chased as he tries to escape to the Underhive.

Side dishes also need to support and reflect their main dishes. This is one reason why sauces are made using the same pan used to brown the meat, so you can capture the fond (meat crust baked onto the pan after browning) into the flavors of the sauce. Sweet side dishes (like applesauce for pork, pineapple chunks served with ham, and cranberry sauce with turkey) provide a nice mirror to the savory aspects of the main dish.

Another way to use a subplot is as a break from the main action. This can be done to provide a breather for the reader after a particularly emotional scene or to heighten the tension after a cliffhanger. Switching to the subplot for a scene or a chapter while the main character's life hangs in the balance is a great way to keep readers turning pages. Bringing in your comic relief character to provide some light humor after a particularly heavy scene filled with intense emotions gives both the reader and the characters a little space to breathe before you head back to the main plot.

This works almost identically for side dishes. A mouthful of creamy, buttery mashed potatoes (or mashed butternut squash, which we really love now) in between tearing bits of spicy barbecued beef from massive ribs gives your mouth and taste buds a break. Cold sides like coleslaw, salad, fruit cups provide a nice break from steaming-hot mouthfuls of fried chicken or fish. A nice, light, steamed vegetable like broccoli pairs well with a dense, inch-thick steak.

Another wonderful benefit of having subplots in your stories and side dishes on the table, is that they help you provide something for every palate. What happens if you reader doesn't like the characters in your main plot? They stop reading, that's what. But if you have side characters in there that provide different outlooks on life, have different issues than the main character, are different ages, genders, backgrounds, etc., you have a better chance of finding some commonality with various readers so they find something they like in your story.

This goes for side dishes as well. Not a big fan of the spice in the barbecue rub, well fill up on corn and coleslaw. Don't really like brussel sprouts? Well, take a second helping of roasted potatoes instead. This is one reason, I like making roasted vegetables. For one thing, it's a great way to cook brussel sprouts. But, also, if you're roasting carrots, potatoes, and cauliflower along with the sprouts, there's something in there that almost everyone will like.

One last point to consider about how subplots and side dishes are similar is that you never want them to overshadow your main plot/main dish. The star of the show is the main dish or plotline. That's what sells the book. That's what you tell your family is for dinner. You don't say we're having brussel sprouts for dinner with a side of steak. And you don't describe "Much Ado About Nothing" as the story of some bumbling cops in Verona.

Like a side dish, which takes up only a single section of the plate, a good subplot only occupies a fraction of the story (probably less than one-quarter at most). If your subplot starts taking over the main plot, it may be time to take a look at what story you are writing and make some changes. If that sub plot is more interesting and the characters more alive than your main plot, consider switching the emphasis of the story to the subplot. If you've done your job and the two plots are complementing and/or mirroring one another, this should work just fine, although it might be a tough sell to your editor and publisher if they were expecting a story about the main character.

Another way that subplots and side dishes can overshadow, though, is in quality and flavor. If your subplot is way more interesting than your main plot, you need to do something to spice up your main plot. If your side dish is the star of the plate, then you may not have spent enough time making sure the main dish is up to the quality that your diners are expecting.

One important point to consider when adding a subplot to your story or choosing a side dish for a meal is how they work with, add to, or complement the main dish/plot. Obviously, you don't want to detract from the overall enjoyment of the meal or story by adding something unexpected. While sweet and sour sauce works because of the combination of flavors, A highly tangy, acidic side dish like a salad with strong onions and peppers might not be the best choice to put with a rack of sweet, Carolina barbecue ribs.

And, yes, comic relief can help cut the tension of a highly emotional scene. One of my favorite uses of this is in Hamilton when they cut to Jefferson saying, "Can we get back to politics now?" immediately after the emotional scenes surrounding the death of Hamilton's son, Phillip. That being said, you won't often see a dramatic main story interspersed with a subplot that is all comedy all the time.

Instead, you want the two stories to play off one another, delve into the same themes (often from different angles), and even hit high points and low points together as the two stories progress throughout the book. In my novel, Soulless Fury, two almost identically important stories are happening at the same time as one character is chasing the other. The viewpoint switches back and forth and both characters suffer losses during their separate stories. These happen right before I bring the two characters together, so they are, separately, at similar points in their story arcs when the confrontation occurs.

This dovetailing of plot and sublot is one of the most exciting uses of the subplot. How often have you read a story where the character arc in the subplot hits a climax near the end of the book and that minor character — because of where they are in their arc at that moment in time — has some small but dramatic impact on the story of the main character? That is subplot synergy at its best.

In the world of side dishes, I can't think of any better example of this synergy than garlic bread. It's savory, spicy with the same spices found in the spaghetti sauce, crispy where the spaghetti is soft, and — best of all — can be used to soak up extra sauce from your plate or as a base for pouring sauce on top to make a pizza later on.

The Turning the Tied anthology is due out at Amazon on March 13. It should be available from Barnes & Noble by March 27. You can preorder them now. There will be both a print and a ebook version.

For more information about the anthology, check out this blog post on the International Association of Media Tie-in Writers website.

Posted by Will McDermott at 4:09 PM