The Nexus of Writing and Cooking, Part 4 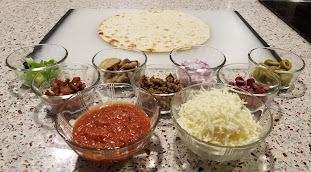 A couple weeks ago, I talked about the tools you need to cook or write. This week, I want to talk about prep time. If you watch any cooking videos on Netflix and YouTube (My two favorites are Binging with Babish on YouTube and  The Chef Show on Netflix) you will see chefs routinely have all the ingredients they need for a recipe right at hand, often in the exact amounts and separated into cute, little bowls or ramekins.

This is called “mise en place,” which is a fancy French term (like a lot of cooking terms) that means “everything in its place.” Obviously, this beautiful presentation of prepared ingredients is great for videos because it makes the cooking appear effortless and speeds up the process on camera (no need to measure and pour when you can simply pour). But, professional chefs do spend time on preparation prior to cooking. (Well, they have a staff of cooks to do that, but you get the point.) And you can even purchase “mise en place” containers for your kitchen.

Even if you don't have a professional set of specialty bowls to hold all your ingredients, You still need to have things like salt, pepper, and other spices easily at hand while preparing a meal because recipes often call for specific amounts at precise times during the cooking process. You also need to cut up any aromatics (onions, carrots, celery, etc.) ahead of time so you don't have to take time away from stirring a tricky sauce to find and dice the next set of ingredients.

I actually do the whole mise en place set up when making pizza at home. I dice up onions, olives, mushrooms, and peppers, cook and crumble bacon and sausage ahead of time, chop spinach and, sometimes (if I don't have leftover sauce in the fridge), prepare some marinara. I do all of this well before I start making pizzas. So, while my family sees pizza as a quick meal, there is a whole lot of prep that goes into making that “fast food” fast.

I do all this prep specifically because it allows me to build the pizzas quickly, just like at my favorite pizza chain, Mod Pizza. And, really, any time I am making a sauce or soup or anything that requires more ingredients than just simple, dried herbs, I do all the prep first (and build in the prep time needed to my meal preparation time estimate). If I want to put a family meal on the table at 7 p.m., I generally start chopping onions around 5 p.m. (Note: I use a lot more onions now than I ever used to before I started watching cooking shows.)

From a cooking standpoint, this all makes sense, right? You need to have everything ready to go once you light the stove so you don't end up scorching the pan while you chop the next ingredient. That's not to say you cant improvise in the middle of making a dish and go search your spice drawer for something to add a little pizazz. I do this all the time (and I will talk about improvisation in a future blog). But, in general, I think we can all agree it is better to prepare your ingredients ahead of time.

Well, guess what? The same goes for your writing. Surprise! Okay, I'm sure no one is all that astounded by this revelation. If you want your writing to have any depth beyond the words on the page, any lasting legacy beyond the rising and falling action in the plot, you need to spend some time on research, and not simply to get your facts right.

In fact, the best writers spend a great deal of time on research before writing a single word. Robert J. Sawyer, a highly successful writer friend of mine, does more research before writing than any author I know. I asked him how much time he spent researching Robert Oppenheimer and the events surrounding the development of the atomic bomb at Los Alamos during World War 2 before he wrote The Oppenheimer Alternative.

Rob told me he spent an entire year doing research before writing a lick of the novel. He lists 132 books in the bibliography at the back of the novel that he used as research. Rob says he read about half of those cover-to-cover and skimmed the rest or used them as references materials while writing.

Now, Rob is a successful author who can afford to spend a year on research, but that doesn't mean the rest of us should skimp on our preparations. The fiction I write is mostly set in other people's worlds. That doesn't mean all my work is done for me, though. I must read what has been written about the characters I am using so they feel right to readers. I need to research the worlds I am writing in so I don't make mistakes when describing places that have appeared elsewhere. Whenever possible, I try to do the bulk of this research before I start writing.

So, what kind of preparations do you need make before writing? Let's take a quick look at some of the “ingredients” you need to prepare before you begin writing your next story.

Obviously, you need to know what your story is about before you write it, but there is more going on here than that, and may levels of preparation. I often write detailed outlines before I start on a novel. but other authors find chapter-by-chapter outlines too constraining. I actually wrote Strangled by Death, my upcoming Kolchak: The Night Stalker novel, with only a rudimentary outline, and this process can be very freeing.

However, at the very least, most authors will lay out a plot structure before just diving in. You want to know where the action will rise and fall so you can build the tension effectively from beginning to end. The three-act structure isn't just a cliche in writing, it's a useful tool for telling compelling stories.

Again, this is a fairly obvious ingredient. But this is an area where lack of preparation can really doom a story. If your characters lack dimension and depth because you failed to put in the time to flesh them out, they won't pop off the page. Not only won't they be memorable, but readers will fail to connect with them at all. They will become little more than stick figures you move around to push the plot forward, and it will show.

So, before you write, get to know your characters. Delve into their personal histories, find out how they think, what they like and hate, how they speak, and how they react when under pressure.And, if you create a minor character while writing who is there to do more than just move the plot along, take the story off the burner for a moment and take some time to prepare a backstory or character study of that figure before you move on.

Then, once you choose the setting, you MUST put in the work to make sure you get that setting right. If you're creating a fantasy or science fiction world, you need to know how the realities of that world work. Is there magic? How does it function? Is there technology? How does it affect the world and the people in it? Many fantasy novelists spend years creating their worlds before they even start writing. And don't think you're off the hook by setting the story in the real world. If you get the names of streets wrong or don't understand the geography of the setting, you will ruin the story for anyone who knows that locale.

Much of this category could be covered under character and location. You need to know and understand the history of these elements just as deeply as you know their present. For example, if you set a story that turns on racial injustice in Birmingham, Alabama you absolutely need to know how the bombing of the 16th Street Baptist church in 1963 impacted the civil rights movement.

Even in fictional settings, however, history is an important element of a story. As I mentioned in location above, you will need to spend time creating the history of the fictional setting for your story, and know how it impacts the current situation where you have placed your characters. If you don't spend time researching or creating this history, the world of your story may feel hollow or fake and could fall apart on close inspection.

One last piece of advice about history, that I believe I first learned from Tracy Hickman at a panel on world building. He said that your world must work. It must function for the people living in it. It also should be basically at peace prior to the beginning of your story (at least on the surface). Your story begins the moment something changes that disrupts the status quo.

If you are writing a story where the disruption that kicks off the plot affects a lot more people than just the main characters, you will also want to spend time researching the impact that this disruption will have on your setting, your characters, and even your plot.

Let me provide an example. In one of my favorite Robert J. Sawyer novels, The Terminal Experiment, the main character accidentally invents a device that can detect the soul when it leaves the body. The story itself, is about the personal journey of Dr. Peter Hobson after the existence of this device (and proof of the human soul) goes public. But, throughout the book, Rob provides glimpses of the repercussions of this hugely impactful event on the world around the main character.

On a more personal level, spending time before you start writing considering how the events of the story will impact the main character — how those repercussions and ramifications will weigh on the character and, potentially, change the character — will make your character's story more impactful for the reader. 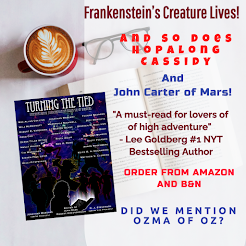 The Turning the Tied anthology is due out in just a few weeks. This is a collection of stories about characters who are in the public domain, like Gilgamesh and (in my story, Baldur and Loki). All the proceeds go to the World Literacy Foundation.

Here is a blog post from Jennifer Brozek about one of the stories in this wonderful collection:

Posted by Will McDermott at 1:57 PM