The Nexus of Writing and Cooking, Part 7 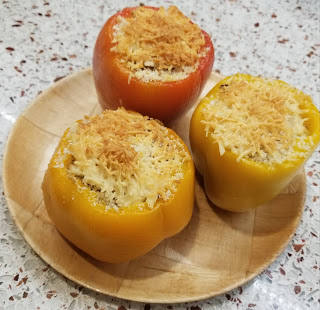 Over the years, my family has enjoyed some wonderful meals — but also suffered through some, let's say, less than appetizing results — from my culinary experiments. Still, when they ask "what's for supper?" and I reply, "An experiment," they don't immediately groan, which means, I hope, that my success rate when trying new things in the kitchen is reasonably high.

Of course, my "kitchen experiments" are generally not revolutionary, totally-from-scratch, three-course dinners. Most of the time, these fresh culinary creations are adaptations of tried-and-true meals or variations on a recipe I found online that I decided to put my own spin on.

Take, for example, the stuffed peppers in the image. I made these the other night. I had baked stuffed peppers once previously (in a bit of a failed experiment because they fell over and didn't cook thoroughly). In addition, I filled these with a seafood stuffing I've made a ton of times instead of the standard spicy meat concoction. I even looked up a recipe for stuffed peppers to get some tips on cooking time and oven temp. I learned two tricks from this research to help correct my earlier mistakes: (1) cut a slice off the bottom to make them stand straight, and (2) par-boil the peppers before stuffing them to make sure they cook through.

This par-boiling trick (something I knew about for other baked vegetable dishes, but often forget to use) might have made my last experiment previous to the peppers work out better. I tried to use thin-sliced butternut squash as noodles in an alfredo-seafood lasagna (we've been eating a lot more seafood lately). What we ended up with was cheesy seafood soup with under-cooked squash. After a little more cooking, we still ate it. But it could have worked better, and I will remember that trick next time.

The basic reason one of these experiments worked perfectly while the other had some serious structural issues was that for the peppers, I was building on skills I had already practiced (and researched the parts I needed help with), while with the squash lasagna, I went out on a limb and tried something I hadn't tried using a technique that I didn't fully understand.

This is a lesson I learned early on in my writing career. You need to learn the basics and practice using them correctly until they become second nature to you. Only then can you break the rules and get away with it. There really is no short cut to this. There is an old adage that goes something like this: "Even Picasso learned the rules of perspective before he started to break those rules intentionally."

Breaking the rules by accident generally leads to "accidents" whether you are typing a story on your computer or preparing a meal in the kitchen (thus, the uncooked squash noodles). This goes beyond basic spelling, grammar, and sentence construction. As a writer, you need to learn a number of tricks of the trade to help your prose flow, make your points clearly, and engage the reader with your sparkling writing.

Here are a few lessons to learn and practice:

These are not all of the basic writing skills of fiction, but these are ones I find essential to master and ones I have had to learn through practice, which involve years of writing and re-writing a lot of stories. There is no easy way, no shortcut, for getting to the point where these skills are ingrained into your writing psyche so you can use them correctly without even thinking about — and then, intentionally, break them to do something interesting with your story.

Once you master the building blocks of writing (or cooking), your experiments will begin to succeed more often than they fail. Over the past 20+ years of cooking for my family (and writing fiction, both of which began in earnest around the same time), I have built a decent foundation of skills and knowledge.

I have a good idea what herbs and spices to use (and in what proportion) to make a dish savory without going overboard and making it too spicy, too salty, unpalatable. In my fiction, I have a good feel for tone and dialog to keep a story believable even when set in a fantastical setting. I know how much time and space to spend on description, narration, dialog, and action to keep readers grounded in the story while driving the plot forward at a good pace.

But all of that will still not make you a great writer. The best writers take chances. Almost anyone with some talent can weave together a compelling story that will keep readers turning pages. The memorable stories are the ones where the author did something new, something incredible that you weren't expecting. Some examples of this from movies include Memento and Inception, which both turned the forward-moving three-act plot structure on its head. I also loved the HBO series, Watchmen, which played with our perception of good and evil, heroes and villains, and time itself.

All that being said, it is still important to follow some rules when you are breaking the rules. Here are three I have learned over the years:

Take a chance on inspiration

When an idea pops into your head, take some time to follow it down the path before you jump in and use it. For example, what happens when your strict outline dictates that character needs to go left but you suddenly realize that character doesn't want to go left, that the way you have written them, they would never go left in this situation. What do you do?

It's almost always a good idea to follow the lead of your characters. If you have done a good enough job to make them believable, they can come to life in your head, and you will just get a feel for how they will react in most situations. However, before you jump in and head blindly down that path, you want to take some time to determine how that decision will affect your outline, and how you can gently move the character back into the path of the plot later on.

I recently got inspired by a box of Roasted Red Pepper soup I found hidden in the back of my pantry. I didn't know what I wanted to do with it at the time, but I kept thinking about that box of soup. A few days later, while looking through the freezer, I realized we had a lot of various types of seafood and suddenly the entire path of the dinner came together in my head and that night, I made an improvised Cioppino using that red pepper bisque as the basis.

This is a rule I was taught a long time ago and I come back to it again and again. When characters face obstacles or enemies and you are looking for ways for them to overcome those obstacles or defeat those enemies, don't always use the first idea that comes to you. This will be the easy answer, the one that probably comes to mind for a lot of people.

Stretch your imagination to find alternative, more interesting, answers. And, sometimes, the best answer is to let your characters fail. Not only does this make the character more believable (no one wins every time), but sometimes even better ideas come from handing your character a setback that forces them (and you) to come up with an even more inventive way to move forward.

I did this recently for one of our dinners. While looking at some hamburger patties in the freezer, I thought we might do Salisbury Steaks (which we have done dozens of times and I can cook them without much thought). But I wanted to do something different that night, so I kept thinking until I came up with  new idea. Instead of using beef gravy, I made some shawarma marinade and cooked the hamburgers in that sauce. It was pretty amazing and will be something we will do again.

Turn a rule on its head

Finally, don't be afraid to turn any of the rules I have mentioned on its head as you write. I am not saying to ignore the rule. I am saying to turn it around for a specific reason in a specific circumstance. Do it intentionally. Do it purposefully.

Let me give you an example. Every writer and fiction editor will tell you the initial chapter of your novel should be written from the POV of your main character. Subsequent chapters can then switch to other POVs in relative order of importance of the characters involved. But in my most recent Necromunda novel, Soulless Fury, I began the first chapter from the POV of a relatively minor character. I did this for several specific reasons.

First, this character had special insight into the nature of the world and, especially, the specific setting I was using for the initial scenes. Starting with him gave me the ability to describe the setting and some of the themes of the novel more directly. Second, the main character was searching for something and I wanted to keep that something a secret for as long as possible. Third, and most importantly, the main character is crazy, mad, insane. She is described in the lore of the world I was writing in as a "force of nature." I wanted her first appearance to be described from the outside, as she swept into town like a tornado destroying everything in her path.

Finding Your Own path

There is so much more I could say on this subject, but at this point, I think the best way to help you master these techniques is to set you loose to do the work yourself. As I mentioned earlier, the best way to learn the skills you need to become a better writer or cook (or, actually, any creative endeavor) is to go practice.

The absolute best advice I ever received about writing was this: If you want to be a writer, then write (and read) a lot! But you have to do both of those with a critical eye. See what works (and doesn't work) in both your own writing and in the writing of other authors (both good and bad). Sometimes you have to eat your mistakes so you can learn how to not make those same mistakes again.

The Turning the Tied anthology is out! You can now order physical copies from Barnes & Noble. Amazon has not yet updated its site with the paper copies, but you can still order the anthology as an ebook from them. If you want to learn ore about this wonderful anthology, check out this IAMTW page, which has links to blogs from other contributors.

Remember, the proceeds from this book all go to the World Literacy Foundation. Plus, it's a fun read with many talented, shared-world authors contributing stories about some of the most iconic characters from the past few hundred years of fiction and myth.

I also want to let everyone know that I have begun work on a new short story in a new (to me) game setting. I have to be vague about this one, but hopefully should be able to provide more info in the weeks to come as things get announced.

Posted by Will McDermott at 2:28 PM