The Nexus of Writing and Cooking, Part 5 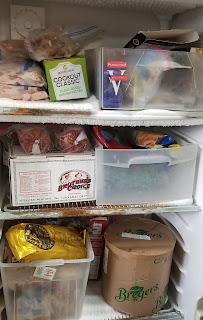 I mentioned in the first part of this series that I have been the primary cook for our family of 5 for the past 20-plus years. Figuring we eat out, on average, about once per week (until this past year, obviously), that's more than 6,000 dinners I have planned and prepared since 2001!

On many days, I have a plan for supper early in the day or even the day before, and I get some meat out from the freezer to thaw early. I often plan ahead for big weekend meals when the meat needs extra time to thaw (hard to cook a roast the same day you pull it from the freezer).

But over the past 20 years, I can tell you that there were many days when I stared at the open freezer late in the afternoon hoping for inspiration to strike (and that said inspiration would involve something I could thaw in the microwave or cook from frozen).

I doubt I'm the only family cook out there who sometimes just doesn't want to cook on a particular day. There are plenty of days when you've been busy working around the house all day — especially during the heat of summer — and you just don't feel like standing at the chopping block and the stove for a couple hours at the end of a long day, especially if you don't already have a meal plan prepared.

I've never been the type of family cook who plans an entire week's worth of meals every Sunday. I prefer to be inspired. But after 6,000 meals, inspiration sometimes is hard to come by, and the drudgery of cooking day after day after day begins to wear on you. This is why family's eat out, I believe: To break up the monotony of the every day meal.

This monotony has come into sharp focus this past year when our options for eating out became nonexistent for a long time. I got to the point where after we finished eating, I would ask the family, "So, what should we do for supper tomorrow night?" Having just cooked for two hours and seen my family devour my hard work in 15 minutes, the only thought in my head was, "I have to do this all over again tomorrow."

This, in a nutshell, is Writer's Block!

Faced with a blank piece of paper (or blank screen in modern parlance), writers can find their mind becomes a blank as well. That's the classic version of writer's block, at any rate. It also can happen when you reach major turning points in your plot or when you realize that your characters have gone off script and you're unsure how to get them to come back to the plot.

Basically, writer's block can happen anytime you reach a break in what you're writing and are unsure where to go next. Sure, there are other ways, times, and reasons that writer's block occurs but, in my experience, this is the most prevalent cause. You're staring at the freezer and have no idea what to make for supper that night.

A detailed outline (a meal plan, if you will) can help you avoid writer's block. Knowing exactly what is supposed to happen next in the plot can reduce the number of times you get stuck and helps you forge ahead even when you don't feel inspired. Some writers, however, feel that detailed outlines stifle their creativity. And even for those who use outlines (as I have for most of my novels), there are still times when characters forge off on their own tangents and you have to find ways to bring them back to the plot or make the plot crash back down on them (which can be a lot of fun).

Other writers simply write at full speed, rushing to put words on the page while the ideas are fresh in their minds. They don't worry overly about typos, punctuation, or sentence structure. They don't preplan how to introduce characters or plot points. They don't spend time searching for the exact right word for every situation. They just write at a breakneck pace, trying to fill all the blank pages with words. These writers can do this because they know full well they will go back through this messy first draft one or more times again to clean up the structure, and improve the phrasing, wording, and pacing to weave the story into a cohesive whole.

I take a different approach. I started out in life as an editor before I became a writer, so it is almost impossible for me to write a messy copy. I edit and revise and alter everything as I am writing. I constantly reread a previous sentence or paragraph and make small — or even large — changes to it over and over until I am content with the finished product.

This process has actually helped me overcome writer's block over the years. I tend to start each day by reading the last scene I wrote the day before, making even more small revisions along the way because I can never quell my inner editor. But what this also does for me is put me back into the flow of the story, so when I am done revising yesterday's work, I can move right into the next scene or chapter because the ideas behind whatever plot point or piece of character development that had been driving me the day before is right there in my head pushing me forward as I write today's words.

After a while, even for the most disciplined authors, this daily or weekly tally can become a crushing grind, a weight around your neck that starts to drag your creativity down into a dark pit. Writer's block.

So, what do you do? Well, waiting for inspiration is just about the worst idea. If you have a deadline, the longer you wait for inspiration to hit the more behind you will get and the heavier that weight will feel around your neck. This is a spiraling road that only ever leads downward.

During 2020, I contracted to write two novels and a short story by June. Then the pandemic hit. I had to write every day. I had to hit those daily/weekly milestones every week for six months. I had to do all of this despite the stress of everything going on around us in the world, despite my normally quiet home turning into a home office for three more people who were sheltering in place with me.

During that time, I found the best way for me to overcome the weight of the grind was to simply "put my butt in the chair and start writing!" I didn't always want to. I didn't always feel inspired. But I did it anyway. I forced myself to write one sentence and then another and then another. Eventually, the inspiration would hit and the words would start to flow and sing. Then, once the inspiration was flowing, I would go back to the day's first few sentences and improve them if needed.

I thought about this the other day while standing in front of the freezer waiting for dinner inspirations to hit me. So, I just reached in and grabbed some frozen, Impossible burger patties, figuring we would simply have a burger and fries night

But then something happened. Once I had made that one decision (choosing burgers over any other meat) — once I had decided to sit my butt down and force my way through the daily grind of cooking supper — that decision freed up my mind and allowed the inspiration to flow. Instead of veggie burgers and fries, that night, I made a tasty Mediterranean variation on Salisbury steak using a homemade shawarma marinade in place of beef gravy. It was a huge success, which came from pushing through my, almost daily lately, cooking block. 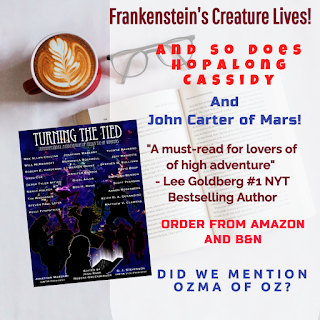 I was recently interviewed by Ben H. Rome, one of my fellow contributors to this wonderful charity anthology. I talk about writing in shared worlds and the inspiration for my story, "The Trials of Balder," which appears in Turning the Tied. Read the interview on Ben's Blog.

Steven Paul Leiva, another author in the anthology, also wrote a blog this past week about what it means to be a writer of Tie-In fiction and the importance of this collection of stories by members of the International Association of Tie-In Writers (IAMTW). Read Steven's thoughts on his Emotional Rationalist blog.

Turning the Tied is available for preorder (in digital format) from both Amazon and Barnes & Noble now. You also can preorder the physical version, available on March 13, from Barnes & Noble.

All proceeds from the anthology will go to the World Literacy Foundation.