Make a (Three-Course) Meal of Your Story

The Nexus of Writing and Cooking, Part 8 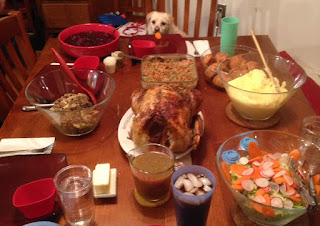 I've discussed this topic tangentially a couple of times during this series (see part 1 and part 3), but I wanted to spend a full blog talking about how to construct both a full meal and a complete story.

There is a reason why the "three-course meal" and the "three-act structure" are important concepts in their respective arts.

For one thing, the number three has mythical power in the world. Both Christianity and the ancient Egyptian mythos have a holy trinity (Father, Son, Holy Ghost and Osiris, Isis, and Horus). Greek mythology has Cerberus, the three-headed dog who guards the underworld. The Norse — and most mythologies — break the world into three realms (Asgard or heaven, Midgard or Earth, and Nilfheim or the underworld or hell).

Humans often break sequences of life into threes. We are born, we live, we die. We go through adolescence, adulthood, and old age. Thousands of years ago, the Greeks believed in the Fates who governed the three phases of life. Today, modern feminine philosophies have rediscovered the trinity of maiden, mother, and crone, who lend their particular strengths to women at certain phases of their lives.

This concept of beginning, middle, and end is powerful and ubiquitous, which is why chefs and writers use it in their art. Any piece of fiction or fine meal can feel incomplete without all three concepts present, which can send patrons away from the experience feeling unfulfilled.

So, let's take a look at the three phases (courses or acts) of both and see what they provide and why they are important to complete the experience.

A salad course or a set of appetizers served before the entrée often set the tone for the entire dining experience, but they also help "wake up" the taste buds of the diners and prepare them for the flavors that will be presented during the main course. This course should be light and refreshing and should never weigh down or fill up the diner. You want this course to whet the appetite of your patron so they move on to the main dish with relish and gusto.

In stories, the first act serves the same purpose. As a writer you are introducing the readers to the tastes and themes of the story. This is where you introduce your characters and set the stage for the main  conflict those characters will face. You want to give readers a little taste of what's to come and make them hungry for more.

A light touch is critical in both of these settings. The flavors in the salad or appetizers should complement and provide a preview of what's to come in the next course. If you go too bold or spicy, you will shock the diner's palate, which can make the rest of the meal taste bland or, worse, sour, stale, or just wrong in comparison.If you disclose too much information in act one, you may accidentally disclose vital plot points that can make readers lose interest in the story during act two as everything becomes too obvious.

A good first act or course entices people to continue on to the next part. It sets the stage for what's to come, but also makes the patron hungry for more. It whets the appetite but never sates the hunger.

The entrée should build on the themes introduced in the first act or course, but also develop deeper and more complex flavors. For example, if you are serving a lemon fish main dish, you might introduce some citrus to the salad course. But if you don't add something more to the fish than just some lemon juice and zest — say some garlic or paprika or even pesto to add some zing, then the fish is just going to sit there, not adding anything to the light, fruity salad that you introduced to set the stage.

In your story, this is where your character begin to develop and become 3-dimensional people with real problems, past issues that impact how they react to present situations, and complex relationships with the other characters in the story. This is also where you deepen the plot with some pressing dangers or interpersonal conflicts that drive the story forward.

Act two is also where you introduce the subplots, which as we've discussed, are analogous to a meal's side dishes (see Part 3, Of Side Dishes and Sub Plots). As mentioned in that post, both side dishes and subplots help you deepen the tastes or themes that you are presenting in your meal or story. They can provide important counterpoints to the main dish or theme or complement that main piece to provide a point of comparison that helps reinforce that theme and bring it to the forefront from a different angle.

Let me give you example. I have a novel in development where the main characters are chasing another character who has betrayed them several times in the past. Throughout the novel, the leader of the "heroes" keeps lashing out at his companions because he personally went through a completely different betrayal recently. He doesn't blame his companions, but that past event keeps coloring his decisions. In the end, this subplot must resolve — the character needs to learn to trust again — before the main plot can resolve.

Think about how you feel when you eat dessert. You feel happy and, hopefully, sated — without feeling over full. That is exactly what most writers are going for in act three of their stories. They try to bring all the strands of the story together in a satisfying conclusion that sends reader away happy that they read the story and satisfied in how it concluded.

As with the first course, you want to keep a light hand here. A heavy dessert can weigh down the rest of the meal in the diner's stomach, making them feel uncomfortable. It's also vitally important to get your flavors just right. Too sweet and the patron may not be able to finish the dessert. Not sweet enough and you run the risk of not satisfying that particular appetite the often puts a smile on people's faces.

The same goes for your writing. Outside of Lifetime or Hallmark movies, most people aren't looking for a highly saccharine ending to a story. Too sweet is often seen as "unbelievable" by readers because life just doesn't work that way. On the other hand, if you end the story on a down note, readers may feel cheated out the victory they were hoping to see for the protagonists that they have been rooting for all along.

When I am writing (and also when I am watching some movies), I often hear the words of the sick grandson (played by a young Fred Savage) in the classic movie, The Princess Bride, when his grandfather tells him that the bad guy in the story — Prince Humperdinck — won't be killed at the end of the book: "Jesus, Grandpa! What did you read me this thing for?"

It turns out, the writer (the wonderful storyteller William Goldman) knew exactly what he was doing. The good guys win and the Prince gets exactly what he deserves, which, for a bully like him, is not to be killed, but to be shown just how cowardly he truly is and then left to live with that knowledge. This is what a great dessert or final act does. It completes the meal or story with the perfect capper, the sweetest taste you can leave in the the diner's mouth without going too far or being too heavy-handed.

Then, if you've done your job by setting the stage for the main meal with a light, enticing appetizer, deepened the flavors you introduced in the first course with a rich, full, filling main course, and then topped it all off with a perfectly balanced dessert, your diners and readers will leave the table satisfied but also craving your next offering

The Turning the Tied anthology is now available in paperback as well as an ebook from both Amazon and from Barnes & Noble. Check out the International Association of Media Tie-in Writers (IAMTW) for more information about this fun anthology and how to order your own copy (and help support the World Literacy Foundation.

I am also working on a new short story for an online anthology set in the Renegade Legion Universe. The first draft is complete and in the hands of the editors. I will have more information about this anthology soon, but you can check out what's going on with the universe over at Budgie Smuggler Games.